Welcome back to the Spotlight BACC! This is the second half of the Royals’ update. The first half is here. I also finally posted the family relationships guide for this household, and it can be found here. And, last but certainly not least, the household guide is here. Not shown: Lancelot slapping Maci after Ricardo flirted with her. I really, really hate that that is still coded into the game. I need to see if I can find a mod that removes it. At least the other sims are reacting to it properly.

I’m still terrible about getting sims to read to their kids that have the Whiz Kid aspiration, but I’m making an attempt!

Brielle is living the dream.

A chill family morning. (WOW I never realized that those are squids on Avery’s PJs, but that makes them even more fitting for her, somehow.) As per the BACC rules, player run businesses have to be operated at least once a week, so I sent Jude over to the Genesis Diner on one of his days off. 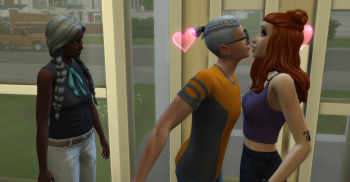 I think this was the first time that the Seagraves family didn’t show up! The EA premades decided to make up for it by showing off their own romantic developments.

Later on Leia showed up at the house to show off her pregnancy!

If I remember right Marcella has the Social Butterfly aspiration. Either way, I had her bond with Elliott Redmond some, which was really cute. Three things you can count on seeing in every Spotlight update: romantic drama, dancing, and family portrait appreciation.

The kids all share a room in this house, but the bunk beds give them so much room that the cats can sleep there, too. (But yes, I do want to build a second floor as soon as they save up more money.)

Now that Naomi is higher on the Politics career track, she needs to secure votes as her pre-work task. I figured Jude would be an easy mark, but he wasn’t! :OOOOO I’m learning so much in this save.

Ollie seems to be wondering why he has to go over flash cards on the cement floor. ;;;;;; I didn’t have enough money to completely do up the house when they moved in, so some changes happened as the week went on, including flooring.

One day I saw Darien wandering by the house looking depressed, and it occurred to me that it could be because Leia had the baby. Sure enough, she and Jaxson have another son! The game named the baby Rocky, which made me laugh because he does actually need an R name. Right now I’m thinking Raymond–I want something fandom related, so I figured Raymond after Raymond Holt from Brooklyn 99. But I could also go Reuben and name him after the Clare Siobhan character. Decisions, decisions. Marcella and Avery aren’t really sure what to think of each other. Marcella and Brielle, on the other hand, became fast friends.

I’d say nobody puts Brielle in a corner, but she put herself there, so… But she pulled herself out of the corner when Darien called to invite her to a teens only party. I’ve never seen an event invitation like that before, so I had to have her take him up on it, even though it sent them into the city, which is off limits. ;;;;;;

And even though there were no teens at the party, apparently???

I took the opportunity to build up Brielle and Darien’s relationship, but of course as soon as I left them alone Darien was a jerk to her. These kids in this save, I swear. Avery and Marcella’s relationship remains a mixed bag. They tend to alternate between pleasant and unpleasant interactions during their conversations. Natalie always knows how to make an entrance.

Shadow helpfully illustrating what it feels like when there are just too many things happening at once. I have no idea why the bathroom was Malcolm Seagraves’ hangout spot of choice, but that’s kids for you, I guess.

There are 2 kinds of Toddler party guests.

No, Loretta, you’re supposed to be the good kind!!! Malcolm eventually pried himself out of the magical bathroom and kept giving his stepdad hugs, which was really cute to watch.

Natalie, staring out over the neighborhood: “Ah yes, my children are great and I am great. Life is good.”
Hank, just out of her eyesight: “WRECKING FTW” But at least Toddler parties give us the chance of seeing cute Toddler bonding moments like this one between Hank Morgan and Kirsten Bjergsen!

Leia is really popular with the kids in Spotlight. Out of all the adults, she, Charles and Natalie are the ones most likely to have befriended kids other than their own children.

Now that Naomi and I are better at the whole securing votes gig, she was able to secure Natalie’s!

In an astonishing turn of events, Avery autonomously apologized to Naomi!

It was apparently such a shock to everything Marcella thought she could count on in life that she was thrown straight into a bear phase.

Brielle loves Marcella no matter what form she’s in, bless.

Some cute Ollie moments for you! (Marcella was interacting with her new favorite family member, the computer.)

They could still stand to have a larger house, but I am glad that they at least have a bigger dining room and living room so that there’s more space for these neighborhood gathering shots.

Marcella used said gathering as an opportunity to meet extended family members and potential friends. I love the idea of her being friends with Ginny Redmond.

I just really, really feel like washing dishes while wearing that costume is probably a bad idea.

Like I said, I’m becoming concerned about how much time she’s spending on this thing. (I say as if I had a leg to stand on when it comes to healthy computer usage.)