Welcome back to the Spotlight BACC! This is the final update for Rotation 11. I have a few house cleaning posts in the works (including one with information about all the imported lots currently in Spotlight) and a few meta posts for good measure. The household at the end of the update, left to right: Harper, Daisy, and Emilia. Daisy and Emilia are sisters, and Harper is Daisy’s daughter with Moses Hill. (Harper was a newborn at the beginning of the rotation, as you’ll see, but I couldn’t afford to buy them the family portrait until after she’d aged up.) Daisy and Emilia are from smoothiemistress‘s game.

Daisy and Emilia actually live in Maci and Lancelot’s old house. I modified it to remove the downstairs bedroom and just have an entire open floorplan. I stretched their starting simoleons as far as I could, and was even able to add a bit of flair to their bedrooms. Daisy couldn’t afford a decent double bed, but she could afford to make her room the level of pink she requires and deserves. I made them best friends almost immediately, both because it was the right thing to do and because Daisy has the Friend of the World aspiration.

While I’m on the subject: Marina played through these girls quite a bit before uploading them, so they came with quite a lot of skills and aspiration progression. Therefore I’m not going to count either of their aspirations toward my points, and I’m not going to count any points for the skills they started out on a high level with. (For example, they both started out with really high Charisma levels and I have since maxed them both out, but I didn’t give myself points for it.) If, however, they arrived in game with 2 or fewer points in a skill, then I’ll give myself points if they max it out in my game.

Okay, back to the update! The sisters are very close, literally. 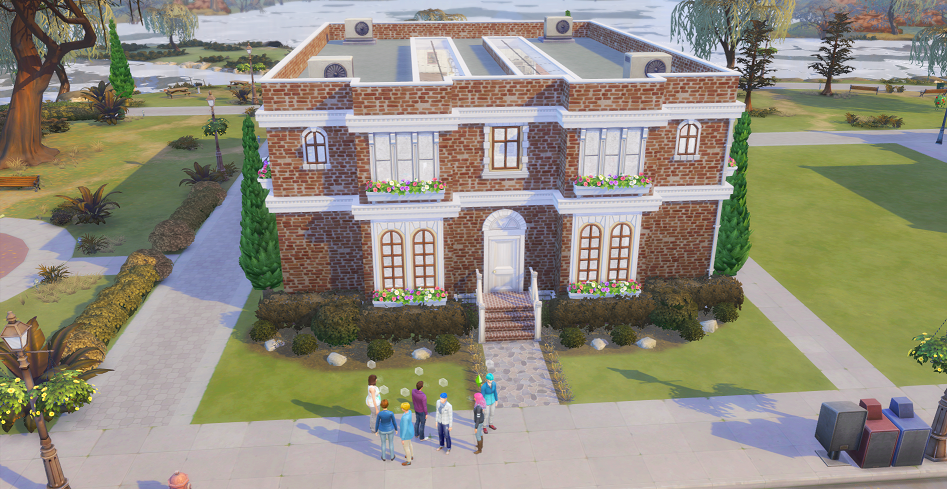 I decided to change things up and send them to the brand new library for their Town Council meeting this week. This was another Gallery find… and apparently the only lot that I didn’t write the name and creator of on my list. >.< I’ll amend this post as soon as I get all that together. I don’t know why the librarians in my game have decided they require veils and glasses to do their job, but I’m not mad about it.

I’m also not sure why Lancelot decided rummaging in the trash would be a fun afternoon activity.

Daisy and Moses had some cute flirty time together in one of the many window settees. Daisy also came with a maxed photography skill, and I definitely plan to take advantage of that.

I love cute neighborhood shots like this, and I love this couple. ❤

Exciting news: I found how to set MC Command Center so that it always gives you the option to have your sims take birth control!! As soon as I had Daisy go off and do something else, Moses made a beeline for baby Harper, which was incredibly cute. Moses is good people for sure. ❤ 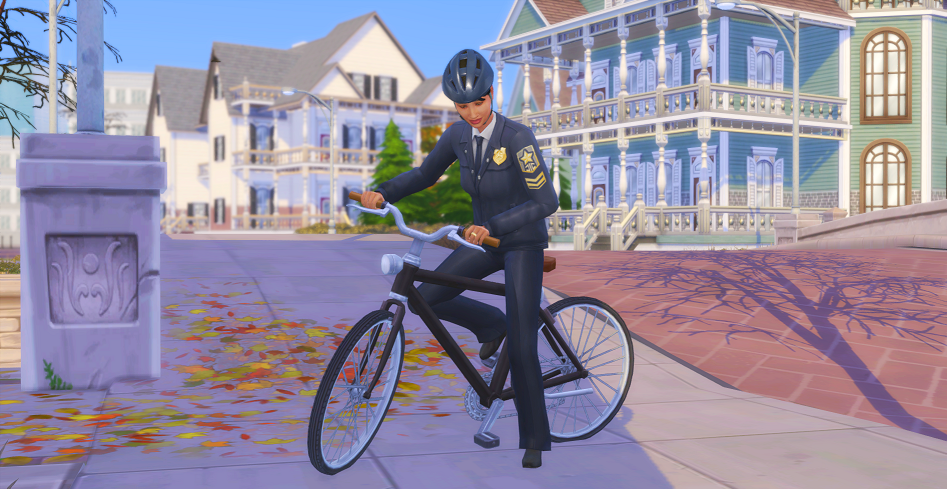 I both love neighborhood shots like these and respect how Maci has matched her bike helmet to her police uniform. 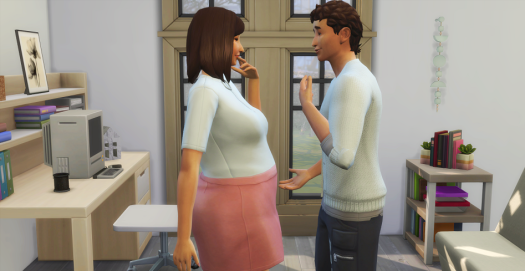 Much to my excitement, Daisy had quickly rolled the want to get engaged to Moses, so I had her pop the question! This works out on a few levels: not only are they my latest Spotlight OTP, but they’ll also fix my housing problem with the Original Household. Once Moses and Scarlett move into the Fitzhugh house, that’ll open up space for Malcolm to move in with Jaxson. (Yes, I’ll probably go over all this in one of those housekeeping posts I was talking about.) Moses is cute, and so is the developing family photos section.

Daisy got engaged and Emilia got promoted, and thanks to Bienchen’s Congratulate More and Amazing Promotion mods they were both able to congratulate each other! Emilia knows when to tune Daisy and Moses out.

Emilia seems to like Moses so far, which is good since they’re all going to be living together and everything. (Not in this house, though–I had them take out a loan so that they could buy a new house. Yes, I’ll go over that in the housekeeping post, too.)

Emilia is real cute in general. Imagine having her as your teacher!

Daisy had given Moses a house key, so he came back over the next day. This is how he greeted Daisy! He wasn’t there very long when Naomi called and invited Daisy to Geek Con. I had to have her accept. I feel like all the Fitzhughs and Morgans in Marina’s and my games would have rolled over in their pixelated graves if I hadn’t.

Awww, Naomi and Jude hug! I like to think that their marriage will pull through, after all. (Man, too bad the unexpected Game pack won’t be a Sims Go To Therapy pack, amirite?) (Yes, I know KawaiiStacie has a therapy option in her Explore Mod, but I’m not sure how many more mods I want to put in my game, haha.) 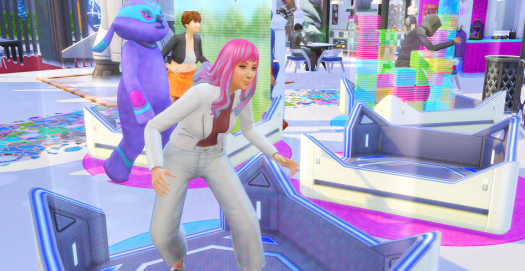 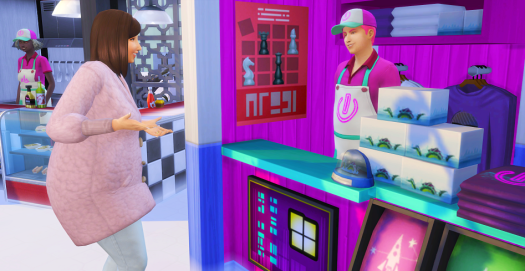 Emilia came to the lot after work, and both girls had a good time–they bought swag, took part in competitions (Daisy won the hackathon!) and talked to the other Spotlight ladies. 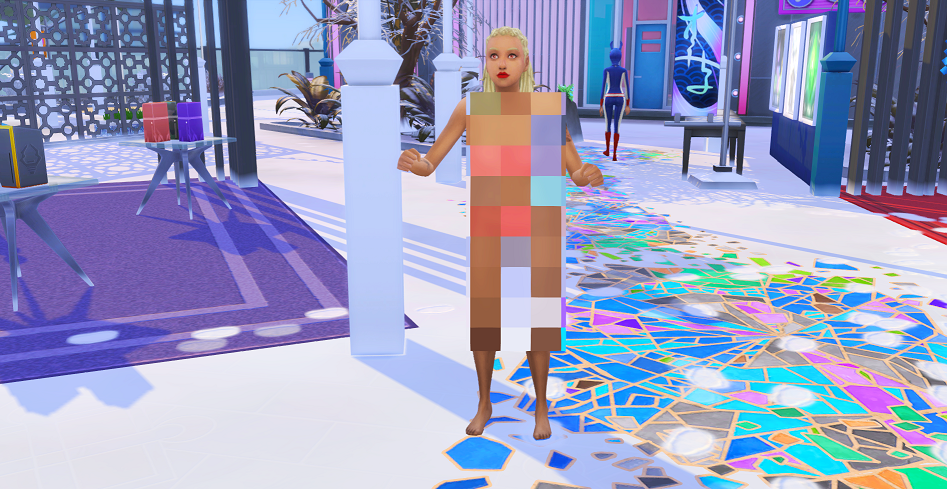 You know Daisy and Emilia are Fitzhughs because they both decided shoveling snow while it was still snowing would be a fun new hobby.

Daisy’s other hobbies include: cleaning the desk six times in one day. 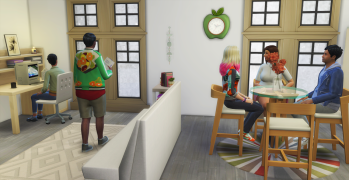 I decided to go ahead and finish Daisy’s aspiration, so I had her invite over a bunch of people she’d met but hadn’t befriended yet. It took several sim hours, but she got those 20 friends and finished the Friend of the World aspiration!

(She also got an autonomous slow dance with Jude, but let’s not tell Naomi about that.)

It was at this point that Harper aged up and became incredibly cute while doing so. She also randomized the Angelic aspiration and no one she knows has died (yet) so she’s a happy, non-whiney, non-dramatic Toddler who doesn’t wake anyone up or need any extra care at all, really. I hadn’t realized how much I needed a low-key household like this until I got it.

These two are already such a cute mother-daughter duo. ❤

Emilia’s frequent promotions and daily shifts (and Daisy’s hackathon win) meant that there was a whole bunch of money coming in during the week. I didn’t want to put a lot of effort into buying things now, since I was planning to move them to a new house and revamp then, but I did at least let Daisy get a double bed. Still a weird life choice to make in the winter, but I mean, at least she’s clothed this time.

The first bald Toddlers in the save, and neither of them could get any cuter! 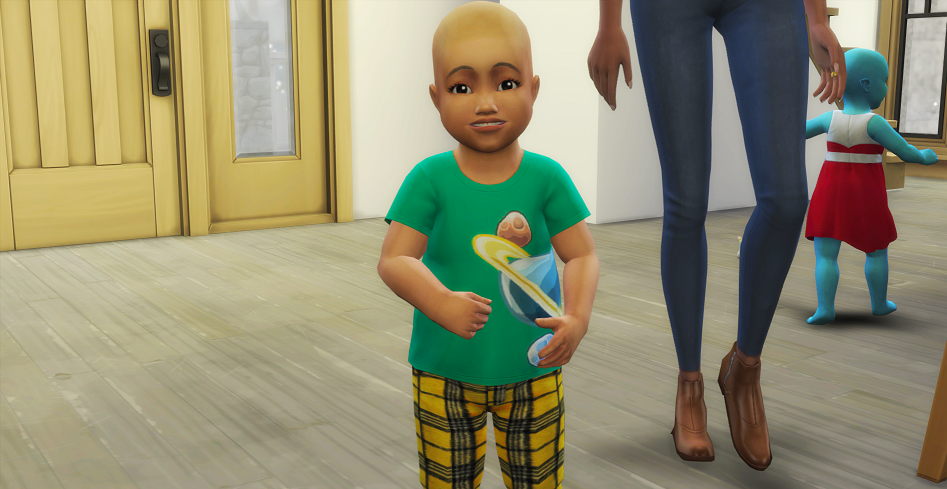 Rocky hung out and broke the fourth wall for a while longer, and it was real cute. 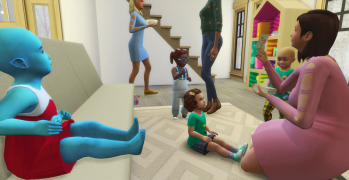 I think both because the house is so small and because there were relatively few things to do, I saw a whole lot more group interaction than I usually do at these parties. A definite advantage to living in a smaller house. Tiny Living was right all along!

Yes hello I still take pictures of all the Toddler hugs. 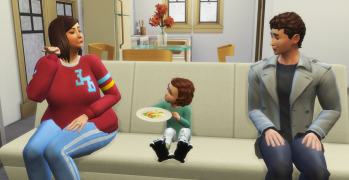 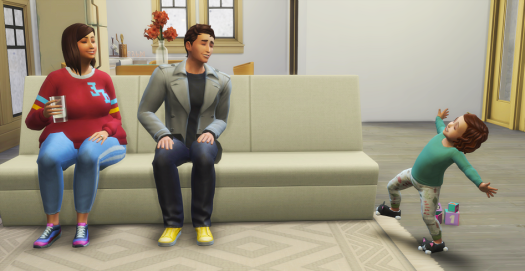 The cuteness didn’t stop there, of course. (With Harper in the house, the cuteness never stops.) Moses came back over, and they got in some really cute, completely autonomous family time. I just sat back and took an absurd number of photos.

And Harper got storytime from her dad.

I just can’t get over how cute these two are. 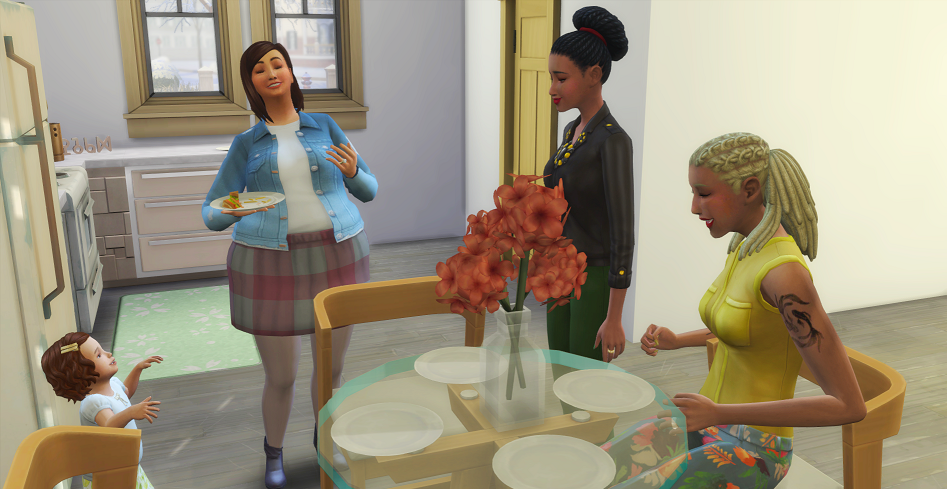 I didn’t really have a lot else in mind for them to do, so I went ahead and had Daisy invite over some of the Spotlight residents. They took to Harper, too.

Emilia ended the week by getting yet another promotion, wore a cute CC dress while doing so. I don’t understand anything that’s happening with in game career outfits anymore, but I’m not complaining. (This is actually a lie–I know how to retag CC via Sims 4 Studio, but I tagged all my clothes last month and have no desire to go back through them all to fix these random career tags.) 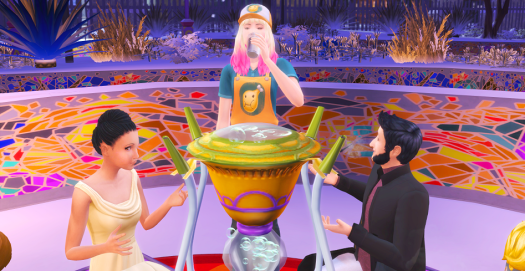 Apparently Candy heard that I wasn’t sure what to do next, because she called Emilia and invited her to the Spice Festival! I sent Daisy along, too.

Daisy actually ordered herself a drink and went home drunk (thanks, Slice of Life!) (she is a flirty drunk, in case you were wondering). Siobhan, that is a lot of judgment coming from someone wearing booty shorts and cowboy boots in winter, I’m just saying.

On Saturday I sent them all over to the Original Household so that Daisy and Harper could meet Scarlett and Emilia could see Lancelot. Not so she could see him fall in mud, but apparently the sims universe decided we could have a little Lancelot embarrassment, as a treat.

Jaxson spent the visit autonomously interacting with Rocky, which made me really happy. I’m not sure how much longer Jaxson has left to live–I set the Elder lifespan to about 21 days, but I can’t remember how long it’s been since he aged up (maybe about that long?) and while I am willing to cheat to find out a lot of things, I’m going to let the death times be a surprise.

Emilia’s job was actually to give Lancelot a voodoo doll! She had one in her inventory–I assume from when the game tasked her to be a vendor at the flea market in the Fyres’ rotation–and he needs it to finish his aspiration, so I had her give it to him. It’s not like any of the Fitzhughs are going to use it, unless Harper pulls an Avery on us and goes from darling toddler to force of nature. 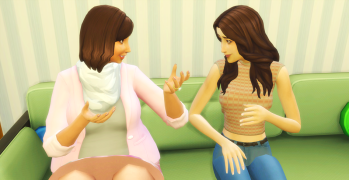 Daisy and Harper both hit it off with Scarlett, which made me really happy since they’ll all be living together starting next rotation. I’ve already moved them into their new house and furnished it, but I’ll talk about all that in a future post.